Posted on May 13, 2013 by Akimel O'odham Youth Collective

On Friday a group of about 30 people were protesting the proposed South Mountain Loop 202 freeway extension in Flagstaff, AZ. There were about eight Akimel O’odham from Gila River along with others from Flagstaff, Prescott, and Phoenix. Although the threat of the proposed South Mountain freeway is in downtown Phoenix, they rallied in Flagstaff in front of city hall at an Arizona Department of transportation (ADOT) meeting. ADOT’s meeting was a public hearing for their five year plan. 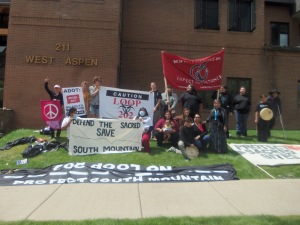 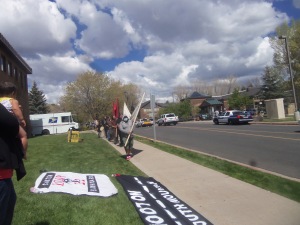 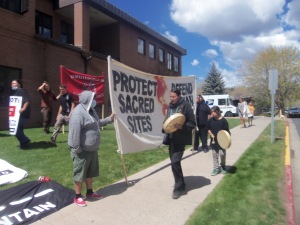 ADOT’s five year plan discusses how their money will be distributed over the next five years. There are three scenarios that can be chosen, scenario A: the majority of money is allocated to preserving existing roads and freeways. Scenario B: The Majority of money is allocated to building new roads and freeways. Scenario C: is a combination of both. The proposed South Mountain Freeway counts as a major project and is included in all scenarios. Those who spoke against the Proposed South mountain freeway expressed the frustration that a two billion dollar project that threatens the cultural integrity of O’odham culture as well as health and environment of the Gila River Indian Community is shown to be built anyway.

Some of those protesting the proposed South Mountain Freeway started around 8:00 a.m. and soon after more came to stand in solidarity with them, the rally went on for about four hours. During that time they held signs and banners saying “Wrong Way on South Mountain” and “Defend the Sacred, Save South Mountain”. Some of these same people have been following ADOT around the state for all the five year public hearing from Phoenix, Tucson, Flagstaff, and soon to be in lakeside in June.

Within the first hour a matinence worker was harassing the group, telling them they couldn’t walk on the stairs. Those who were speaking were going in and out, waiting outside because the ADOT panel put their comments at the end so it took almost two hours until they spoke. Others were only sitting on the stairs with their children. From this the worker said he would call his supervisor and cops if they didn’t move.

Finally after a long wait the name of those were called to the podium to say their comments. Ana Morago member of Akimel O’odham Youth Collective also one of the o”odham who made the trip from Gila River had to say this during her comment, “this freeway is like me coming into your house or church and telling you and your family you need to get out so I can save time on my way to work.”

During that time those outside were marching around the building sing traditional songs carrying banners and sings. Along with a symbolic bulldozer labeled ADOT and Pangea (Pro – Freeway Tempe Based Corp.) Around that time the police came, due to the worker calling them. The police said they got call saying “the protesters are keeping people from going in and out, blocking the stairs.” One of O’odham from Gila River, Mathew Allison said “Im sure they felt our presence, we were peaceful the whole time yet they feel threated enough to still call the police.”

With the release of the Draft environmental Impact Statement (DEIS) released about two weeks ago there are many upcoming events. One of these events is the DEIS public hearing at the Phoenix Convention Center on May 21st, 2013 from 10:00 a.m. to 6:00 p.m. please join us in another rally that day from 11:00 a.m. to 3:00 p.m. We need all the support and comments against the Proposed South Mountain Loop 202 Freeway. to leave
comments send them to
Letters:ADOT Loop 202 South Mountain Freeway Study
1655 W. Jackson Street
MD 126F
Pheonix, Arizona 85007
E-Mail: projects@azdot.gov
Phone: 602-721-7006
Comment on page: azdot.gov/SouthMountainFreeway

We are a youth based group of the Gila River Indian Community outreaching, organizing, and informing youth about the issues going on in their community. An example includes the proposed South Mountain Loop 202 freeway extension, going on the reservation or off the reservation. We strongly oppose this project and will be working with all O’odham to stop this freeway. Youth today are always given false information, we hear so many sides of a story, yet most don’t hear all of the information. The AOYC is here to change that, we want to give the correct information to the youth so we may grow stronger as a group as well as a community. We will outreach to youth in the community so that they may become involved in the issues that will affect their future. We want youth to know of the issues that will directly affect not only themselves, but as well as their O’odham Himdag (traditional way of life). AOYC will organize gatherings and rallies so that youth have a say and are heard. In our previous experiences, we have not seen many youth out in the public participating in rallies or demonstrations. We want to empower youth so that the community knows how important these issues are to us. In near future expect more youth actively speaking and doing what is right for our community SO GET INFORMED AND TAKE ACTION!!!! Contact Info: Email: akimeloodhamyc@gmail.com Phone #: (520) 510-3407 Phone #: (520) 350-0603
View all posts by Akimel O'odham Youth Collective →
This entry was posted in Uncategorized and tagged AOYC, Flagstaff, loop 202, no build, O'odham, South Mountain Freeway. Bookmark the permalink.