ADOT IS RACIST! O’odham Resistance Against the Loop 202!

On Saturday November 15th, 2014, the Arizona Department of Transportation (ADOT) came to the Gila River Indian Community (GRIC) to hold a public forum regarding the Final Environmental Impact Statement (FEIS) for the proposed South Mountain Loop 202 Freeway. About 25 people attended to show their resistance to the freeway. Moadak Do’ag, also known as the South Mountains, is a sacred place for all O’odham people. Eighteen other tribes also have cultural affinities to the South Mountain range, although ADOT did not consult directly with those eighteen other tribes listed in the FEIS. The Gila River Indian Community has a history of opposition to the proposed freeway dating back to the late 1980s, yet ADOT continues to plan freeway construction through Moadak Do’ag. GRIC’s tribal council has passed three resolutions against the freeway and countless actions have been taken by community members over the decades.

The morning of November 15th started off with a prayer run beginning from part of the South Mountain range that ADOT plans to blow up for freeway construction. The prayer run went throughout District Six of the Gila River Indian Community, which is the part of GRIC that would be most harmed by the proposed freeway. The prayer run concluded at a community gathering place, the District 6 ballpark. The roughly 5 mile run had runners from age 10 to 50 years old, and included runners from the other tribes that are listed in the FEIS. The runners were met with more supporters at the District Six ballpark. The group then marched down 51st Avenue to the Komatke Boys and Girls Club where the ADOT forum was held. Marchers held signs and banners reading “ADOT IS RACIST – No More Freeways On O’odham Land”, “Save the Mountain”, “We Love Clean Air”, and several others.

The group rallied in front of the Boys and Girls Club before going inside to the forum. In prior rallies against the 202, police and security have stopped GRIC members from displaying signs and banners but on Saturday, the group marched inside still holding their signs and banners. ADOT presented a 15 minute video showing simulations of what the proposed freeway would look like. This prepared video was most of their presentation. ADOT representatives did not take questions from the GRIC members at the forum. People were then invited to comment to the FEIS. Mike Tashquinth, an elder from Komadk in District Six who has been a vocal opponent of the freeway for several years, spoke. Soon after Tashquinth’s words, many people attending the forum began to chant “No Build! No Build!”

Inside the building at the forum

Rolinda Perez, another GRIC member opposed to the freeway extension, said, “My three boys and I all had asthma from the years our family lived in Phoenix. We had to be on medication, inhalers and even breathing machines every 4 hours. When we moved to District Six eleven years ago, some of us got better and were taken off asthma medication. Now I have an 8 year old daughter and am worried about her health if the freeway gets built.” Air quality is a big issue in Gila River because the pollution from the freeway would stay in the valley located in between the Estrella Mountain and South Mountain ranges. District Six of the GRIC is in that valley between the mountain ranges, and air quality experts have projected that airborne pollutants would be greatly concentrated in that valley.

Other harmful effects include the total destruction of any habitat for the wild horses that roam in parts of Gila River Indian Community, which the Community has identified as a resource to be protected. Section 4-128 of the FEIS states: “Although wild horses and burros are present on Community land and may occur adjacent to the E1 Alternative, field observations concluded no suitable habitat for wild horses or burros is or would be available within the action alternatives.” There are 45 species of plants and animals that have protected status in Arizona, and which also have habitats that would be destroyed if ADOT builds any alignment of the proposed freeway extension. Most notably, these include the following threatened species: Sonoran desert Tortoise, Tucson shovels nosed snake, Yuma clapper rail, and yellow-billed cuckoo. In addition, the FEIS states that known nesting sites and foraging sites of the American bald eagle and golden eagle would be destroyed if the freeway is built.

Gila River Indian Community members opposed to the freeway also held a strong stance that ADOT is racist, and that their freeway planning of the proposed project has also been racist. In their FEIS, ADOT cites municipal resolutions from Litchfield Park, Tolleson, Avondale, Gila Bend, Laveen, and Phoenix as the basis of potential placements of the proposed freeway, while also completely ignoring the three GRIC resolutions to protect sacred sites, as well as a February 2012 vote in which the Community voted in favor of the No Build option for the 202 extension. Many Community members also point out the environmental racism of ADOT pushing for a freeway to be built over sites sacred to the O’odham people and eighteen other tribes.

The four people in front are from ADOT

The FEIS is one of the last steps ADOT needs to take before they start construction, which they plan for in 2015. After the FEIS comment period ends, the Federal Highway Administration (FHWA) will make a Record of Decision ( ROD). The ROD is the official document in which the federal government states whether or not ADOT can build the freeway. However, many GRIC members understand that the release of the ROD is just another step in the long process of resisting the freeway. GRIC members at the forum also demanded that the GRIC tribal council litigate against the freeway, citing several federal laws regarding protection of the wild horses, protection of sacred lands, protection of religious freedom, and their civil rights as minorities. Monique Rodriguez, a Community member from the village of Vahki, said at the forum, “Even if the freeway continues with its process, we will need to be brave. Come join us and stand for what’s right.” Many people spoke but the message was clear. “We will stop this freeway by any means necessary,” said Andrew Pedro, 20, from Sacaton. 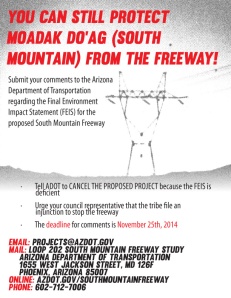 We are a youth based group of the Gila River Indian Community outreaching, organizing, and informing youth about the issues going on in their community. An example includes the proposed South Mountain Loop 202 freeway extension, going on the reservation or off the reservation. We strongly oppose this project and will be working with all O’odham to stop this freeway. Youth today are always given false information, we hear so many sides of a story, yet most don’t hear all of the information. The AOYC is here to change that, we want to give the correct information to the youth so we may grow stronger as a group as well as a community. We will outreach to youth in the community so that they may become involved in the issues that will affect their future. We want youth to know of the issues that will directly affect not only themselves, but as well as their O’odham Himdag (traditional way of life). AOYC will organize gatherings and rallies so that youth have a say and are heard. In our previous experiences, we have not seen many youth out in the public participating in rallies or demonstrations. We want to empower youth so that the community knows how important these issues are to us. In near future expect more youth actively speaking and doing what is right for our community SO GET INFORMED AND TAKE ACTION!!!! Contact Info: Email: akimeloodhamyc@gmail.com Phone #: (520) 510-3407 Phone #: (520) 350-0603
View all posts by Akimel O'odham Youth Collective →
This entry was posted in Uncategorized and tagged ADOT, ADOT is Racist, AOYC, Arizona, gila river indian community, loop 202, No Loop 202, No South Mountain Freeway, O'odham, Sacred Sites, South Mountain Freeway. Bookmark the permalink.